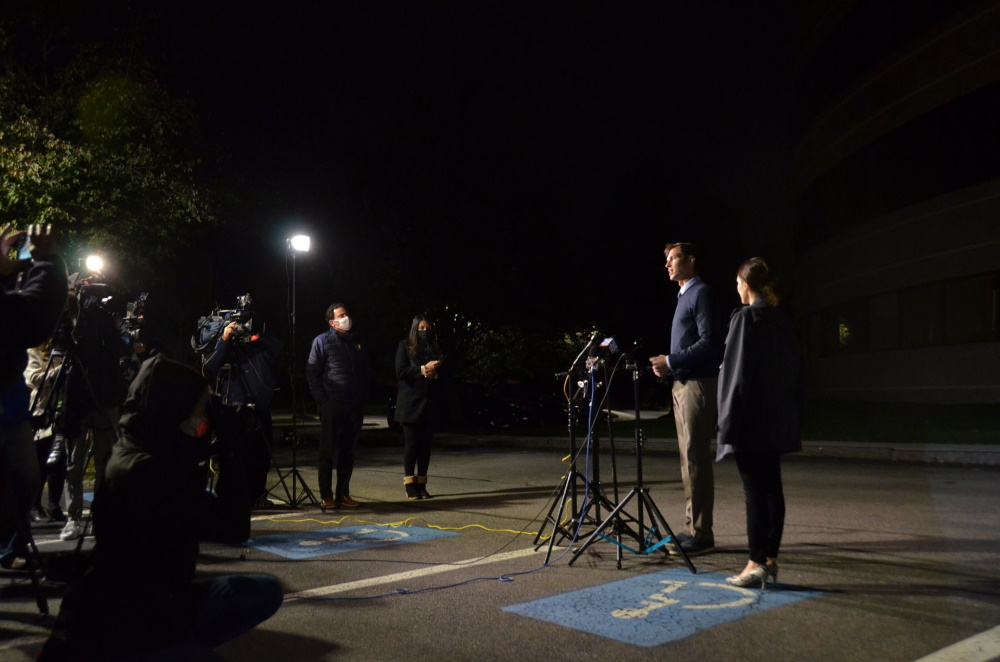 "I'm proud of this delegation and I think that we're in a position to make sure that Massachusetts values are well represented in the next session of Congress," said Rules Committee Chairman Rep. James McGovern, who spoke to reporters over Zoom and thanked voters for supporting him against Grafton Republican Tracy Lovvorn.

McGovern said Massachusetts has "probably one of the most influential delegations in the country" and identified passing an infrastructure bill as one of his top priorities for the next two years.

Twelve minutes before midnight, the Massachusetts Democratic Party congratulated Auchincloss and all eight incumbent members of Congress in a tweet, writing that the state was "sending another all-blue delegation" to Washington, D.C.

The Associated Press called the general election for Markey at 8 p.m., as polls closed in Massachusetts, around the same time the news agency called the state for Democratic presidential nominee Joe Biden.

"I meant what I said on primary night -- the age of incrementalism is over," Markey said in a livestreamed speech. "The time to be timid is over. Now is our moment to think big, build big, be big. As individuals, as political leaders, as a nation, we must turn what must be done into what gets done. In 2021, we will put justice on the floor of the United States Senate."

The Green New Deal co-sponsor flagged immigration reform, expanding the Supreme Court, racial justice and workers' rights as other issues he planned to fight for in the new term.

"We will not return to the so-called normal, we will not take the easy way out or find the middle ground," Markey said. "We will think bigger, act bolder and be braver. Our young people are ready. Let us join them."

Both Markey and O'Connor described their campaign as civil.

Wendy Wakeman, O'Connor's campaign manager, said in an NECN interview after 9 p.m. that she would be encouraging O'Connor to run again, calling the political newcomer "a candidate committed to freedom and liberty."

"Ed Markey should have been taken out, and frankly, if it weren't for COVID, I think he would have, despite the funding disadvantage. He rakes in money from all over the place," Wakeman said. "We're going to look at taking out Markey again, and we're looking at a big future for Kevin."

O'Connor, who video-chatted with reporters from his campaign's gathering at Amrheins in South Boston after calling Markey to concede, said he plans to be "active in public life going forward." 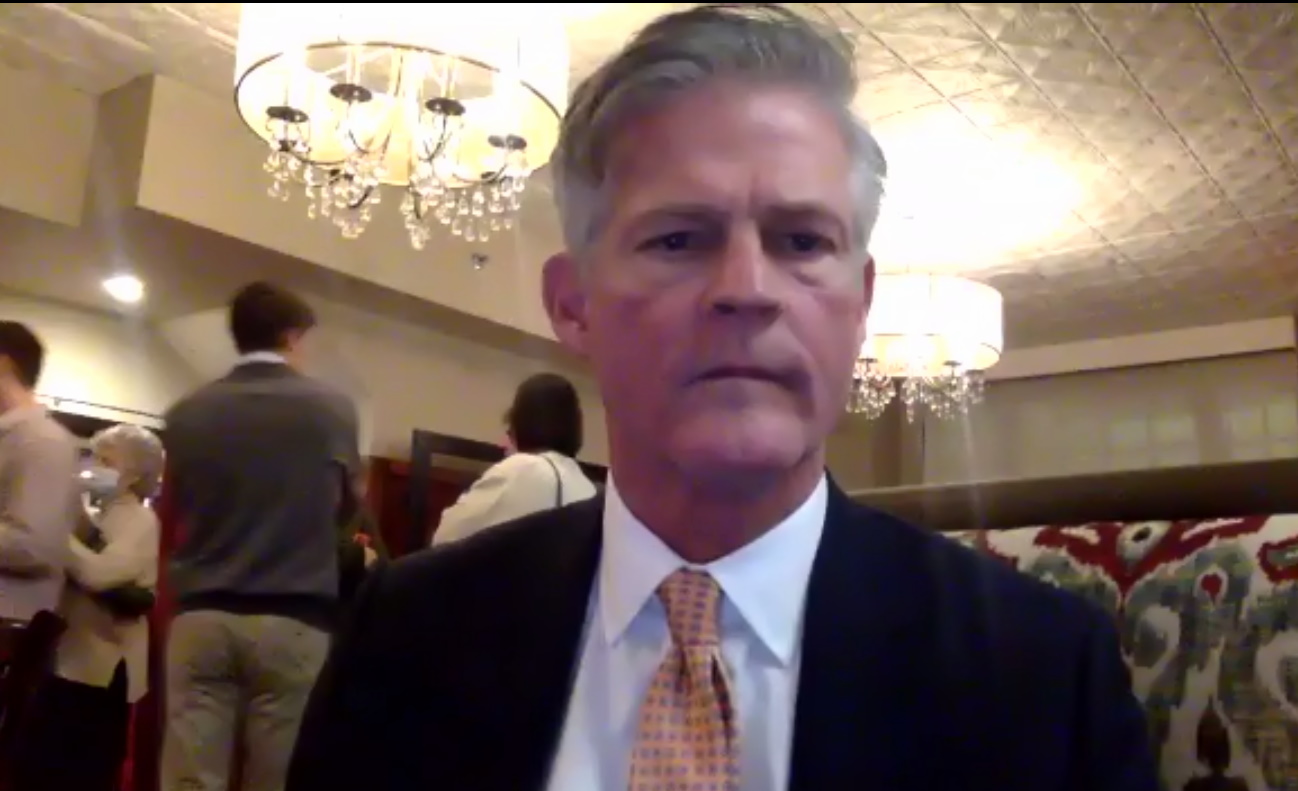 "I think that we can we win it on the substance, but we've got to make sure that we're speaking to all demographic groups and all age groups, and I think the numbers will probably reflect that Senator Markey, to his credit, did a good job of reaching young voters, and if that's the case, hats off to him, and we'll be riveted on that issue next time around."

Senate races were still undecided in many states when Markey delivered his livestream address to supporters after 9 p.m. If Democrats flip the Senate, Markey and Sen. Elizabeth Warren could be poised to take on more prominent roles in the majority.

Warren, who indicated a willingness to leave the Senate through her own presidential campaign this cycle and by saying this spring she'd serve as Biden's running mate if asked, has also been floated as a potential candidate for a spot in a Biden administration, if the Delaware Democrat unseats president Trump. Such a move would open up a Senate seat and could shake up both the delegation and the state's down-ballot political offices.

In the Fourth Congressional District, Republican candidate Julie Hall, a retired Air Force colonel and former Attleboro city councilor, had not conceded when Auchincloss claimed victory for the seat Kennedy gave up to challenge Markey.

With 63 percent of precincts reporting around 11 p.m., Auchincloss -- a Marine veteran and centrist who worked on Gov. Charlie Baker's 2014 campaign and topped a crowded field in September's primary with 22 percent of the vote -- had 155,517 votes to Hall's 83,817.

"Tonight's about this country's opportunity to rebuild after four years of an administration that has left us weaker, sicker, poorer and more divided than any time since the Civil War," Auchnicloss said, according to video from Rhode Island's ABC6. "Together we can chart a course of renewal, we can put science in the driver's seat, beat back COVID, we can fight climate change and transition to a clean energy economy, we can protect women's reproductive rights, we can stand up for racial justice and we can keep weapons of war off our streets and away from our schools."

Hall said she would not concede Tuesday night.

"All my entire life, as a woman in the military, and I started off at the very bottom of the rung as an airman, I was challenged every step of the way," she said in video shared by Rhode Island station WPRI 12. "And I didn't quit and I won't quit now."

Democrats have long had a grip on the Massachusetts delegation, and Tuesday's numbers indicated the party will maintain its hold as the intense race between President Trump and former Vice President Joe Biden drove a high level of turnout here and throughout the country.

The last Republicans the Bay State sent to the U.S. House were Reps. Peter Blute and Peter Torkildsen, who were both elected in 1992 and served until losing to Democrats -- McGovern and former Rep. John Tierney, respectively -- four years later. Ambassador to New Zealand Scott Brown was the state's last Republican senator, serving from 2010 until 2013.

The dean of the Massachusetts Congressional delegation, Ways and Means Committee Chairman Rep. Richard Neal, and one of its newest members, Rep. Lori Trahan, ran unopposed this year.

Rep. Ayanna Pressley, who like Trahan was first elected in 2018, thanked supporters for electing her to a second term and asked them to "just take good care of yourself" as election results rolled in and movement supporters prepared for challenges ahead. She ran against independent candidate Roy Owens and a write-in challenger, Randolph Republican Rayla Campbell.

Pressley recalled meeting a couple Tuesday morning at the Shelburne Community Center who had voted together over five decades and seen "heartbreak and progress," an 18-year-old voter who told her he was "ready to make his voice heard," and a woman in Roxbury in her early 70s who had lost a leg to diabetes.

"I told my daughter to bring me because I would not be able to sleep until I voted," Pressley said the woman told her.

Describing unprecedented voter turnout in her 7th Congressional District and across the country, Pressley in a 9 p.m. webinar address said, "I thank you for your radical acts of love. Together we have fought for the humanity and dignity of our neighbors."

Rep. Katherine Clark, in a 10:45 p.m. statement, thanked voters for re-electing her in her race against Stoneham Republican Caroline Colarusso.

Clark, the vice chair of the House Democratic caucus, announced in September that she planned to run for assistant speaker if Democrats keep their majority in the new term.

"There is much work to be done," she said. "The COVID-19 pandemic has shaken our community and our economy to their core. Americans are sick and suffering, and have waited too long for relief and real, science-based solutions to this crippling public health crisis. Delivering a national strategy to contain the virus and stabilize our families and our businesses remain my number one priority."