STATE HOUSE NEWS SERVICE -- Voters of Massachusetts said no Tuesday night to a reform that would have dramatically altered the way voters choose their elected leaders, rejecting a ballot question backed by a who's who of current and former political leaders from both parties that would have allowed voters in future statewide elections to rank candidates in races with three or more choices on the ballot. 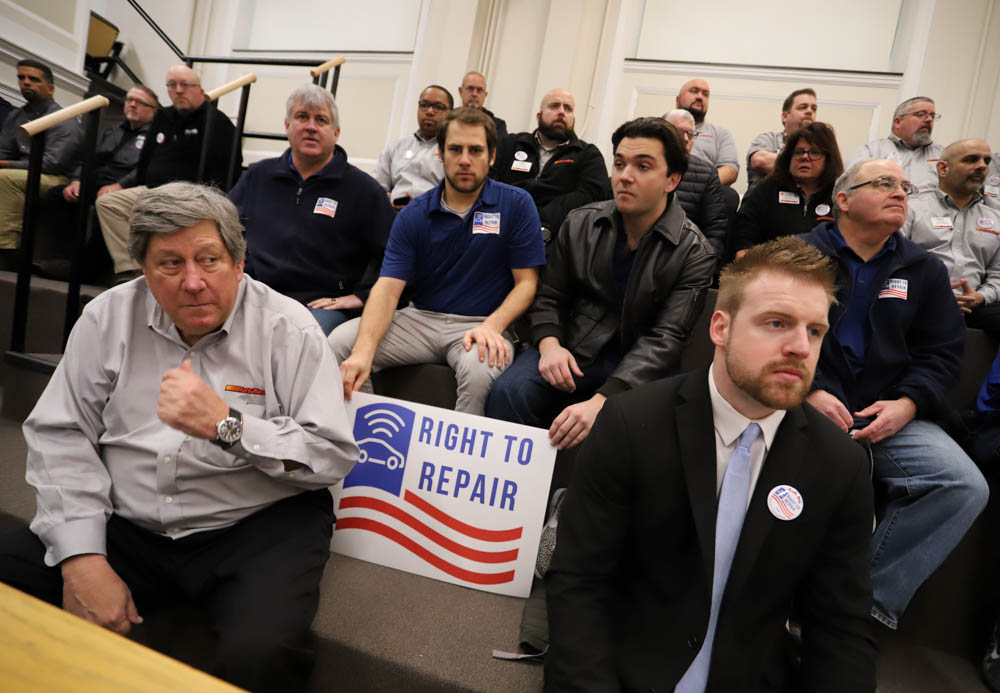 Supporters of the proposed update to the "Right to Repair" ballot law, including Right to Repair Coalition director Tommy Hickey (bottom right), waited for the start of a crowded Consumer Protection Committee hearing on Jan. 13, 2020. [Sam Doran/SHNS/File]

Voters approved the other ballot question, breaking in favor of giving independent mechanics access to wireless vehicle data to repair cars by a three-to-one margin, according to incomplete and unofficial returns.

Supporters of the auto repair question said their win at the ballot box would ensure that consumers can get their car or truck repaired wherever they want, but even after conceding defeat opponents of Question 1 said the Right to Repair Committee failed to show why the change was necessary.

Unofficial results showed voters favoring Question 1 by a three-to-one margin with over 65 percent of precincts reporting, according to the Associated Press.

"It's your car. You paid for it. You should be able to get it fixed where you want," said Tommy Hickey, the campaign director for the Yes on 1 campaign.

The verdict on ranked-choice voting, also known as Question 2, took longer, but proponents conceded their campaign not long after midnight after waiting to see if votes from some of the larger cities in Massachusetts could turn the early momentum against the initiative back in its favor.

"We came up short in this election, and we are obviously deeply disappointed," said campaign manager Cara Brown McCormick. "But that's certainly no reflection of the hard work of the thousands of dedicated volunteers, staff and surrogates of this campaign. Even amidst a global pandemic, we were able to mobilize a movement to strengthen our democracy in a time when it's needed most. We were attempting to do something historic in Massachusetts and fell short, but the incredible groundswell of support from volunteers and reformers that assembled behind this campaign is reason enough to stay optimistic about the future of our democracy."

With 80 percent of precincts reporting, the ranked choice voting question trailed with 45.5 percent supporting the initiative and 54.5 percent opposed, despite proponents raising nearly $10 million and vastly outspending opponent who raised just over $3,500.

The goal of the ballot question was to require the winner of a political campaign to secure a majority of the votes cast and to cut down on the influence of "spoiler" candidates by allow voters to rank their choices rather than vote for just one candidate. Supporters also said ranked-choice voting, which has been adopted by just one other state, Maine, would force candidates to try to appeal to a broader swath of the electorate and cut down on negative campaigning.

But the opposition, which included Gov. Charlie Baker, worried that a ranked-choice system, also known as instant runoff, would inject a degree of complication to the voting process that would discourage more people from getting involved.

"At a time when we need to be promoting turnout and making it easier for voters to cast their ballots, we worry that question two will add an additional layer of complication for both voters and election officials, while potentially delaying results and increasing the cost of elections," Baker and Lt. Gov. Karyn Polito said last week as hundreds of thousands of voters were already casting their ballots.

The ranked-choice ballot question had the support of U.S. Sens. Elizabeth Warren and Ed Markey, who won reelection Tuesday, as well as past governors from both parties like Deval Patrick and William Weld, and former Secretary of State John Kerry.

The system is designed to avoid situations like the one that unfolded in the Fourth Congressional District this cycle. Congressman-elect Jake Auchincloss won a crowded Democratic primary in September with 22 percent of the vote.

Under a ranked-choice system, the eventual winner of a campaign would have to earn a majority of the votes cast. If there is not winner after the first counting of the ballots, the lowest finisher would be eliminated and their votes redistributed based on their voters' second choice.

The process would continue to until someone could claim a majority.

The change would have been one of the most significant election reforms in generations. In 1966 the term of the governor was extended to four years and six years later in 1972 voters lowered the voting age to 18. But in those cases and other reform over the years, the manner by which voters elected their public officials remained unchanged.

On the other ballot question of the night, voters approved an update to the 2013 "right to repair" law, which ensured that independent auto repair facilities had access to the same vehicle diagnostic data as manufacturers and dealerships.

The new ballot law will require that the owner of a vehicle be allowed to give independent repair shops access to the mechanical data collected and transmitted wirelessly by computers onboard cars and trucks. The systems, known as telematics, were not covered by the 2013 law, but have become more prevalent in newer models.

The history of the auto repair question is a unique one.

In 2012, lawmakers struck a deal over access to diagnostic information, but it was too late to remove the "right to repair" question from the ballot, and voters wound up passing a version different from the compromise. The Legislature a year later revised the ballot law to better capture what had been negotiated between mechanic and car manufacturers.

Leaders on Beacon Hill are not ruling out again tinkering with the newest motor vehicle data ballot law.

Sen. Paul Feeney, who co-chairs the Committee on Consumer Protection and Professional Licensure, said he has not had any formal discussion about reviewing the ballot law, but would be open to hearing suggestions for how it could be improved.

"I felt it was best to respect the process and let the voters decide before we started discussing hypotheticals," Feeney said on Tuesday. "I am certainly inclined, however, to meet with all of the stakeholders and regulators if the ballot initiative passes, to ensure that it can be implemented effectively with both consumer protection and public safety in mind."

"I feel strongly that the will of the voters is sacrosanct, however, and I am extremely reticent to support any major or substantive changes to the law, if passed at the ballot," he added.

Hickey, in his post-election remarks, dismissed concerns raised by some opponents that it would be unworkable to require manufacturers to outfit vehicles starting with 2022 models with an open-access data platform compatible with an app for consumers that would have to be designed for repair information to be shared.

"The automakers and their army of lobbyists will make noise and make up stories, saying 'it can't be done,' just like they did during the campaign," Hickey said. "In fact they said the same exact thing about implementing the first right to repair in 2012, but you rejected the automakers flimsy arguments with your votes and the will of the voters matters."

While repair shop owners argued that this information was necessary to preserve the livelihoods of independent auto mechanics and give consumers choice in who repairs their vehicle, opponents said it could expose drivers to data theft and was not necessary to repair a vehicle.

The Coalition for Safe and Secure Data tapped into the more than $26.4 million raised to fight the ballot question to run numerous ads, including ominous spots suggesting that location data could be stolen, putting victims of domestic violence at risk.

"As we have said from the beginning, the right to repair and the ability of local repair shops to access vehicle repair information are already enshrined in Massachusetts law. Today's vote will do nothing to enhance that right – it will only grant real time, two-way access to your vehicle and increase risk. At no point did the Yes side provide any credible arguments as to why national auto parts chains need this information to service your vehicles," the Coalition for Safe and Secure Data said in a statement.

The ad war between the two side was paid for with huge sums of outside money that flowed into Massachusetts, with parts manufacturers like Auto Zone helping to fund a more than $24 million campaign to pass the ballot question, and car manufacturers like General Motors, Ford and Toyota financing the $26 million opposition campaign.